In the 820s and the 830s vikings raided the Dublin area and built a settlement here in 841. The vikings not only took as much treasure as they could find they also laid their hands on people. They took women, men, and children. Also weaving was one of the most important craft in the viking world!!

Did you know 15% of women probably died during child birth?? Also Men lived about till the age 30!!

Servants used bread as their plate instead of using a regular plate. When the servants were done with their bread (their plate) they gave it to the homeless!! Isn’t that pretty amazing what happened back then?? 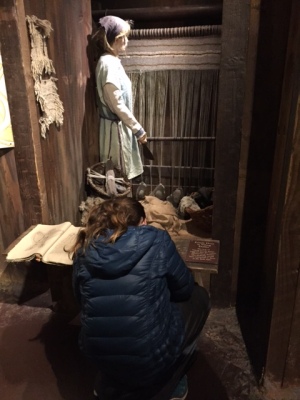 Jennie lives in Southern California with her husband and four children. She loves to travel, write poetry, and be by the water. She received a certificate of the Bible through Torchbearers Bible School, attended Hope International University for her undergrad, received a certificate in Spiritual Formation through the Apprentice Experience at Friends University, and a Masters in Pastoral Studies. She has written Soul Cries: A Book of Poems, Soul Cries: A Journal, and her newest book is Shaping the Soul: An Artist Collective. She owns and manages www.jenniedenney.com, where she writes a weekly blog with stories, practices, and lessons she is learning, to help her readers know they are not alone in their own becoming and encouraging them to connect with God. Follow her on IG @jennie.denney and Pinterest @jenniferpdenney. View all posts by Jennie.Denney